NO FEES UNLESS WE WIN!

Can Parents Be Liable for Teen Manslaughter?

The 17-year old son of a wealthy Los Angeles entrepreneur admitted vehicular manslaughter on April 23 for a fatal accident back in February. He was sentenced to house arrest until June 30 when another court hearing would be held.

The fatal accident came to be after the kid’s father recklessly gave his son a Lamborghini Urus SUV as a birthday gift and the teen drove it way over the speed limit, crashing into and killing 32-year-old Monique Munoz.

While the teen has been charged with gross negligence, the question remains if his father can also be held responsible for the actions of his son or even serve jail time. Since the driver was still a minor, according to California Vehicle code 17707 there is a legal ground for the parent to be punished for the reckless actions of his son while he was behind the wheel.

However, there are still more reasons for parental liability to be taken into account in cases such as this. It’s something you should be aware of as a parent when letting your teenage children get behind the wheel.

In this case, some legal theories can be taken into account for the parent’s or legal guardians’ joint liability for the collision. Parental negligence doesn’t just come from being responsible for the actions of a teen driver, but also from knowingly handling a vehicle to someone with a history of negligent behavior on the road.

To shed light on how a parent can be held responsible we must consider the following legal theories on parental negligence:

If a parent knew or should’ve known that the driver was a danger to others or himself on the road and they still entrusted their kids with a vehicle they can be held liable for putting the car in the hands of a historically negligent individual.

In our particular case study, even though the teen admitted vehicular manslaughter, the parent can still be held responsible for the negligent entrustment of the Lamborghini to his son since he already had two prior speeding tickets and had his provisional driver’s license suspended according to the Los Angeles Times.

This type of parental liability appears when the teen driver is acting under the direction of the parents and causes an accident. For example, when you lend the family car to your son for him to buy some groceries and he decides to go around the neighborhood with his friends and causes an accident then the parent can be held liable for all the damages caused by their child.

Vicarious liability in a teen driver car accident is also known as the family purpose doctrine.

In the State of California, the parent must sign the driver’s license application under Vehicle Code 17707 for any driver under 18 years old. The law stipulates that “Any civil liability of a minor arising out of his driving a motor vehicle…is hereby imposed upon the person who signed and verified the application of the minor for a license” meaning the parents or legal guardians will be held jointly responsible for the teen driver’s negligent actions that lead to a vehicular collision.

Section 17708 of the vehicle code also holds parents as potentially liable for the damages caused by their children when they give permission, be it express or implied, for the minor to drive and end up involved in an accident of his own making.

Another parental negligence norm specific to California juvenile court law is the “Willful Misconduct” as an outlier for parental liability. Covered by the Civil Code Section 1714.1 it states that “Any act of willful misconduct from a minor that results in injury or death of another shall be imputed to the parent or guardian”  in the case of the Lambo accident, it was reported by witnesses that the driver of the Urus was not only recklessly driving at 106 mph, but also racing with a female friend.

Willful misconduct is described as being fully aware of your reckless behavior. In this case, because the driver knowingly traveled at such high speeds, swerving in and out of traffic, parental liability due to conscious reckless behavior can be argued in court. 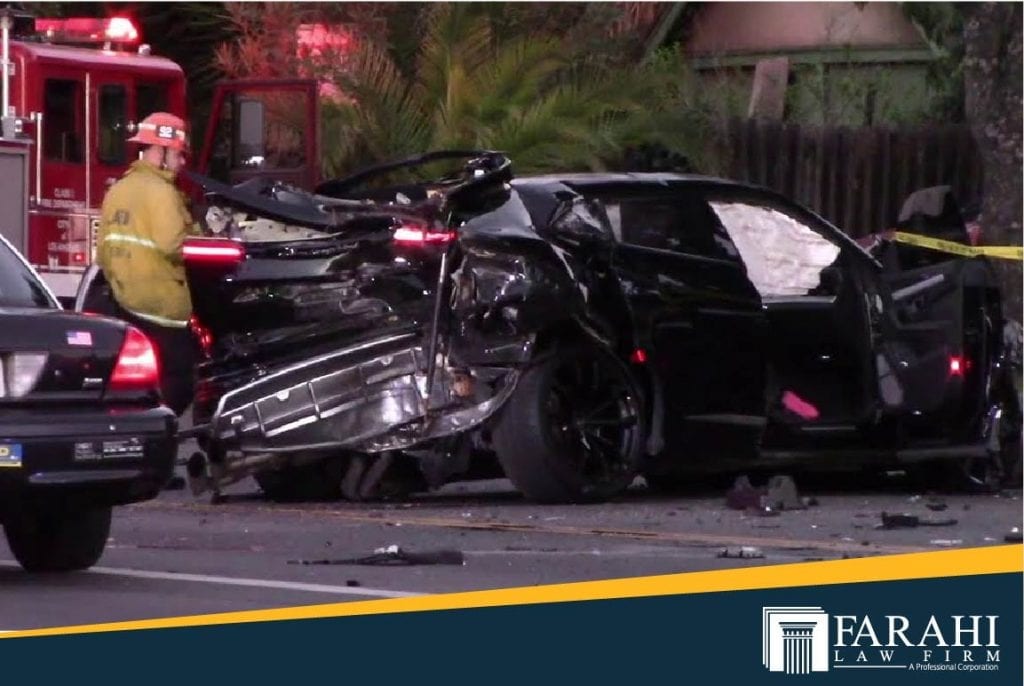 Got in an accident due to a reckless teen driver? Contact us!

If you or any of your loved ones got in an accident with a teenage driver, be it a minor or an adult teen, remember that you don’t have to go through it alone. Contact our personal injury lawyers today! Farahi Law Firm, APC is committed to helping you get the proper medical treatment you need and win for you the money you deserve.

We work under a No Fees Until We Win guarantee, meaning you don’t have to pay us a cent until we win your case. Forget about taking money out of your pocket for medical treatment or property damage repairs, we can do it for you. Contact us for a free consultation at (844) 824-2955.