How to Read a California Accident Police Report

When you get in a California car accident one of the first steps to take is notifying the police and other emergency services of the collision for them to be able to file a police report on the matter. According to the California code section 20008 any party involved in a vehicular accident that resulted in injury, death must report it to either the California Department of Motor Vehicles (DMV) or the police within 24 hours of the accident, although it is common that the officer that responds to your emergency call right after the accident will be able to file the report for the affected parties.

While the report is most of the time not admissible as proof of liability in a court of law it can help your personal injury attorney do a preliminary review of your case and reconstruct the accident from the data described in the report. Just as well, your insurance company will require the traffic collision report to proceed with the insurance claims.

As one of the prime personal injury law firms in Southern California, we feel that is our duty to inform you what goes into the whole process of getting the police report as well as knowing how to read it. While it might look like this kind of form is only reserved for lawyers and insurance adjusters, knowing how it works and what goes into it will help you understand the process of your case better.

What is a California Accident Report?

The CHP 555, as the car accident report is known, is a document filed by the police to report on the traffic collision. The form includes:

This report is crucial to your personal injury claim as it contains the initial details and reason for the accident to occur and will help your attorney with the data to start determining your monetary compensation from the accident. 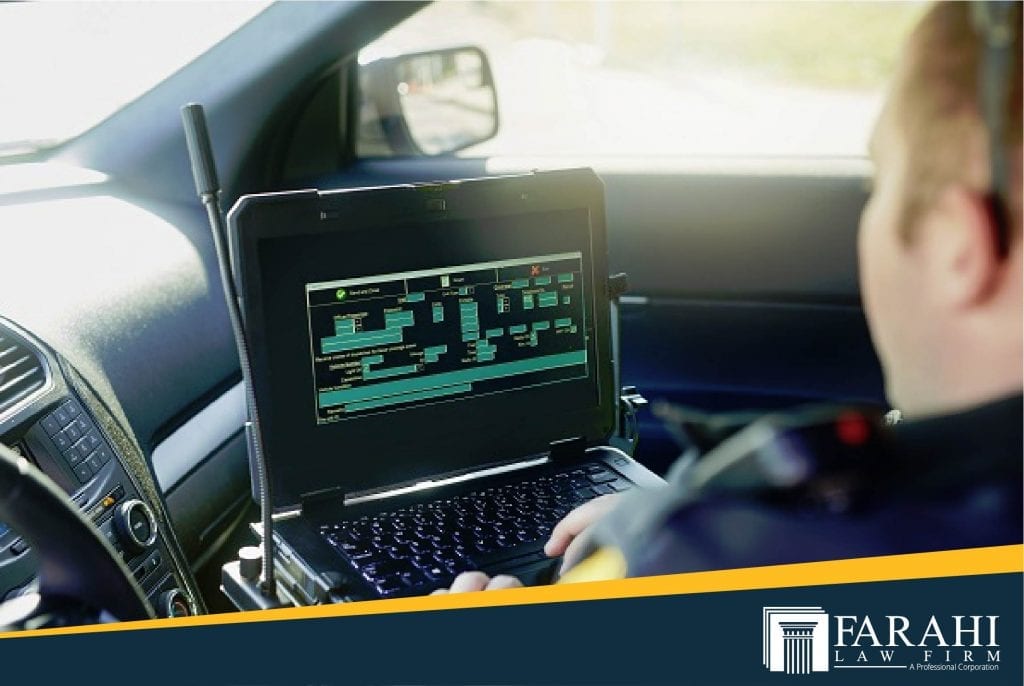 Who Can Request the Accident Report?

According to the California Highway Patrol, any party involved or interested in the details of the accident can request the traffic collision report from the police or DMV after filling the CHP 190 form for the release of information. In this form, the CHP requests the interested party data like:

You can get the police report in two ways, either by mail after filling the CHP 190 and mailing it, in which the report will be sent to the address of your choosing as soon as payment is processed. In case you don’t know the office where your report was filed and in turn, where you have to mail the request form you can always contact the CHP headquarters at (916) 843 – 3000 for inquiries on the process.

The other way you can apply for the request at any California Highway Patrol office, where the process is similar to the one by mail. The advantage this option has is that you can pay in cash for the report, giving you a lot more flexibility regarding the payment process.

To make the request on site you must also present an identity card as well as money for the report, nevertheless, you will still need to contact the CHP headquarters to know at which office your report was filed.

The parties that can request a traffic collision report include but aren’t limited to:

How is the California Car Accident Report Composed?

Our attorneys at Farahi Law Firm, APC have reviewed thousands of police reports, and as such we know how they are structured, allowing us to make the best possible review of your case.

The police report is usually 3 to 4 pages long, in which all the pertinent and important data of the car accident is written down, from the names and information regarding the vehicles involved, the specifics of the accident to the victims and witness statements, the police report will help you understand your case better.

While it can be a little bit daunting at first for you to understand all which is written down on the report, with this brief overview of the police report we want to make sure you understand it better.

Page one of the Car accident Report 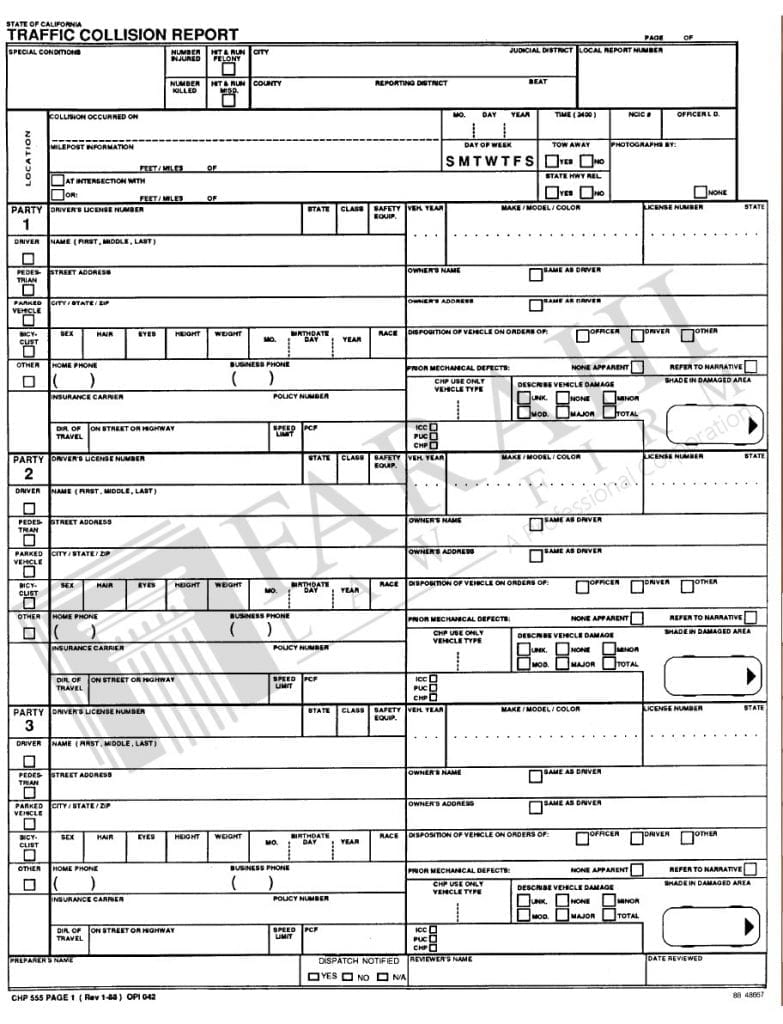 The first page of the police report deals with the information and details of the drivers involved in the collision and has space for up to three involved parties. It has 3 distinct sections:

In the top section of the report, the police would write down any “Special Conditions” that apply to your case such as emergency vehicle or services involvement, fatalities in the accident, or a late report. It also includes the number of people injured and if the accident was a Hit and Run. As is expected this section includes the location, date, and appropriate court district of the accident. The top part of the page also lists the investigating officer ID number.

The data collected on this form page is:

Page two of the Police Report 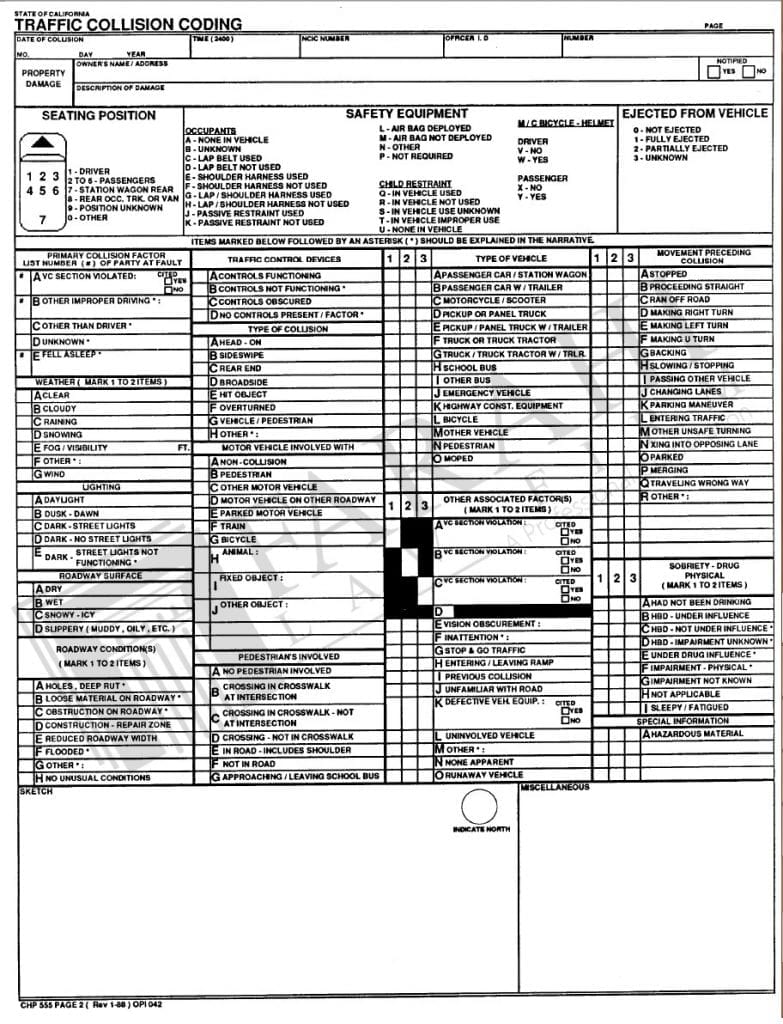 The next section of the page deals with Traffic Collision coding used to fill the boxes from other pages. The officer will mark each section applicable with an X according to the coding. The leftmost columns are used to describe the crash as a whole like if the driver broke a traffic law or another error it also deals with weather, lighting, road surface, and general condition.

The third column from the left lists the type of vehicles involved in the accident as well as other associated factors, this part of the report is where the police officer would write down something that indicates if any other contributory factors caused the collision. This is particularly important and can play a critical role in the case, more so if liability for the collision is disputed between the parties.

The rightmost column on the second page will mark the specific details regarding the movements of the vehicles involved in the car accident such as:

Last but not least, the final section of the rightmost column will detail if any of the parties involved were under the influence of alcohol or drugs. As you know, driving under the influence is one of the most contributing factors to car accidents around the country, as such, if the driver that hit you was intoxicated, this will help you establish liability for the accident.

Page three of the Police Report 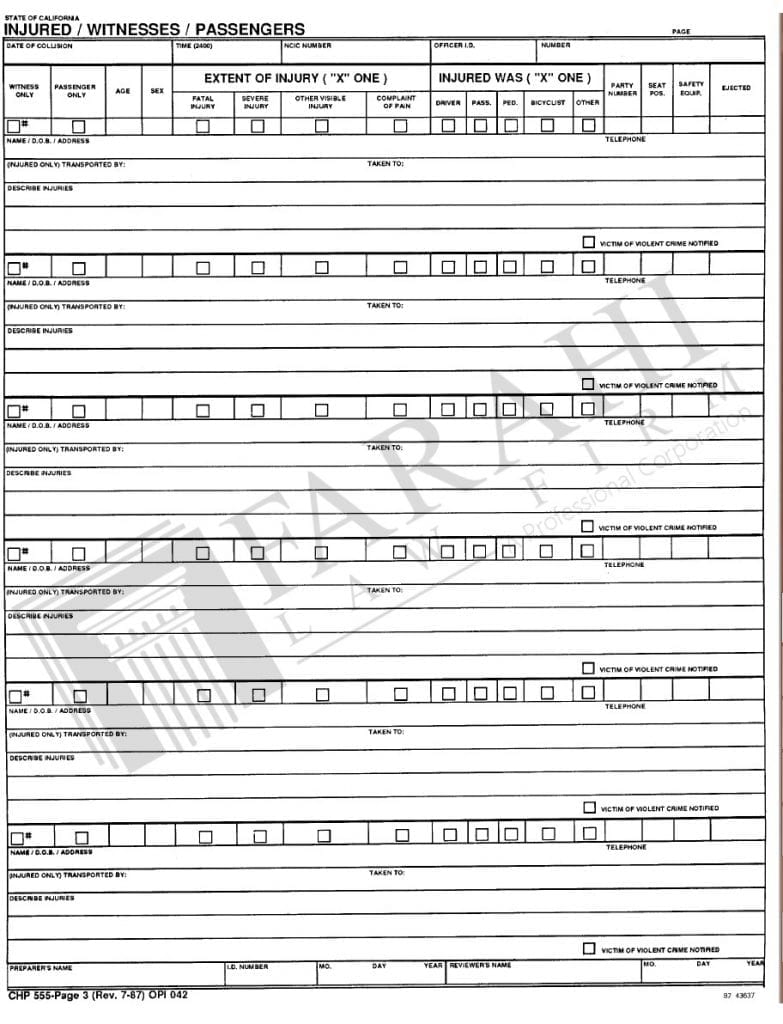 The third page of the report gives us a description of the injured parties, passengers, and witnesses of the accident. As with previous pages, the top section should be uniform across the whole document.

Injured individuals are to be listed first on this page, followed by witnesses and uninjured passengers or drivers that took part in the accident. Here, the top right section describes the person’s involvement in the accident and should match page 1 of the report.

Each section of this page includes details such as the person’s name, contact information, and description of their injuries from the accident as well as the place of treatment for them. This section also includes the name and contact information of the witnesses and the investigating officer’s name and ID at the bottom of the page.

Page four of the Police Report 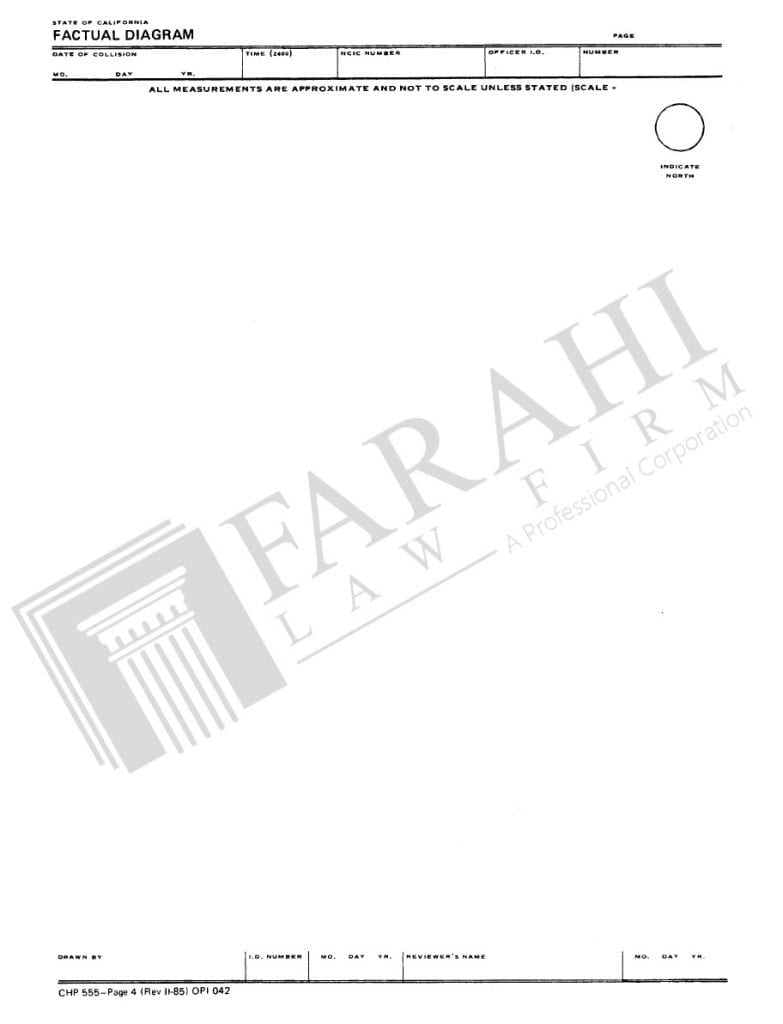 The fourth page is used by the police to create a diagram of the accident where they will draw the events as reported by the parties involved and the interpretation of the investigating officer. This is an important part of the report for your lawyer to review so they can dispute any conflicting statements from other parties as well as help you determine clear liability for the accident.

Now that you know how to read and interpret the police report for a car accident in California if you ever get involved in a car accident, it is important to contact your trusted personal injury lawyer specialized in California car accidents to review it and establish clear liability for your case.

Our top-rated lawyers at Farahi Law Firm, APC have helped thousands of people in this regard, and we always fight hard to get you the maximum compensation you deserve, at no cost for you whatsoever. Our clients are our priority now and always and we will always walk you through the car accident and personal injury claiming process.

If you have been in a California car accident, don’t hesitate to contact us at (844) 824-2955. Your Justice is Our Cause! If you want to learn more about how we handle personal injury cases as well as getting more information about our practice areas you can check our information resources because You care and We care too!.