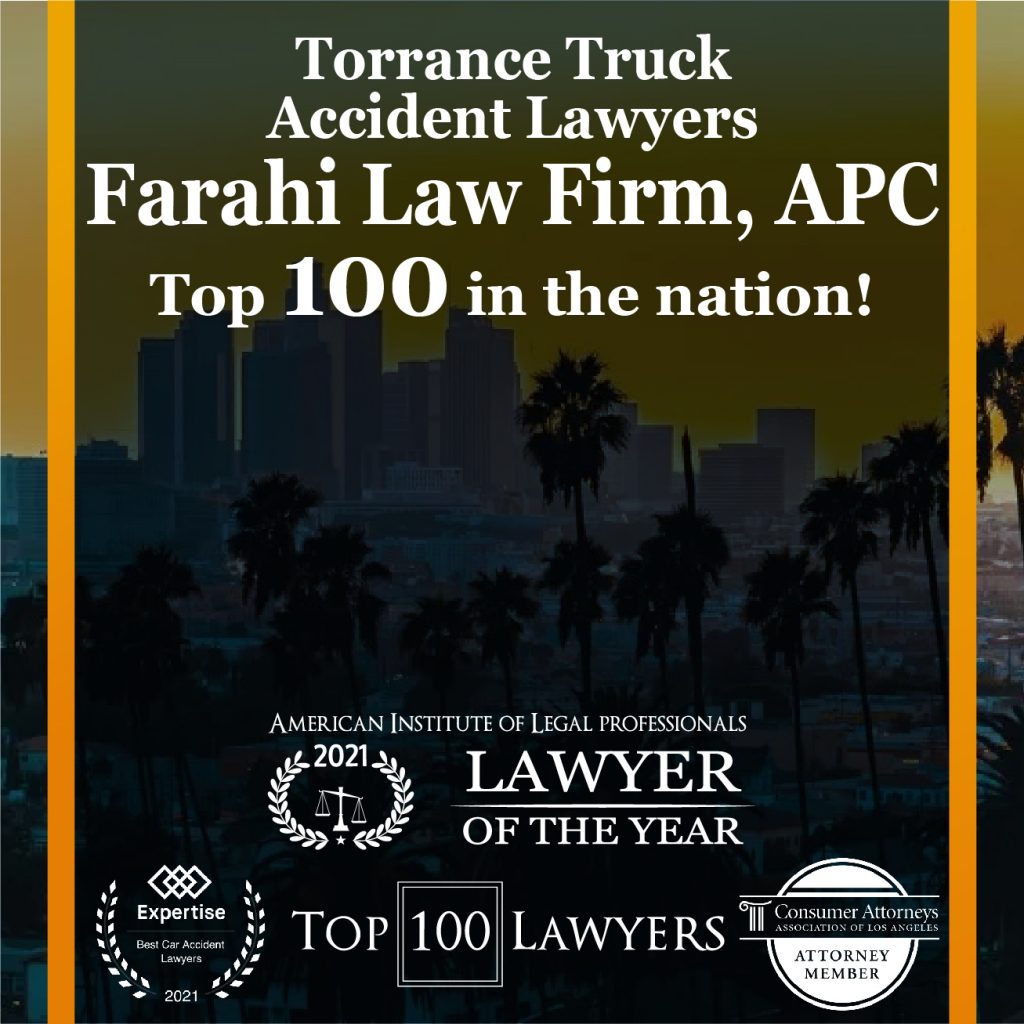 Truck accidents can be scary and often catastrophic. It’s extremely common for there to be injuries or wrongful death. If you or someone you know has been injured or wrongfully killed in a truck accident, don’t hesitate to contact our expert Torrance truck accident attorneys at Farahi Law Firm for legal services. We care about you!

Because of their larger than average size and mass, accidents involving trucks are more likely to inflict severe wounds to the victim than other passenger-vehicle accidents. According to the Insurance Institute for Highway Safety (IIHS), about 4,119 people died of truck accidents in 2019, 31% more than in 2009. PolicyAdvice reports that passenger vehicle occupants made up 68% of all truck fatalities in 2021.

There are diverse causes as to why trucks are part of two or more vehicle accidents while on the road. Even if it is expected for a commercial truck driver to be more educated in terms of defensive driving as well as requiring special licenses to be able to drive, here are the most common causes for commercial truck accidents in the US:

Truckers spend most of their time on the road, with many opting to drive overnight or even go more than 24 hours without sleep instead of taking proper rest. While it is understandable because of the tight deadlines they sometimes have for their deliveries, they put other motorists at risk.

Driving in a fatigued state can lead to microsleeps (when your body shuts down without you realizing it because of lack of sleep and general fatigue) while on the wheel. These 30 seconds to 1-minute shutdowns that the body suffers can lead to a driver error that results in serious accidents.

Driving under the influence

Alcohol and drug use is a well-known problem for truck drivers. Some of them take both non-medical and over-the-counter drugs while stopping through towns in addition to alcohol. But it is also common for truck drivers to carry these substances while on the road. Driving under the influence of drugs and alcohol impairs judgments and lessens your reaction skills; this could put other drivers and even the truck driver themselves at risk for a catastrophic injury.

Sometimes, truck drivers are forced to drive through unfamiliar places. Not knowing the road, coupled with other causes like the ones mentioned before can lead to fatal auto accidents for your average motorist.

Going over the speed limit is one of the most common causes of accidents with all types of vehicles. Even more so with trucks, because of their size, their mass is multiplied exponentially the faster they go. An accident with a speeding truck most of the time is fatal for other vehicles involved, while the trucker and their machine can come out unscathed thanks to their size, mass, and overall manufacturing.

Most Common Types of Injuries in Truck Accidents

The physical injuries that you can sustain after being involved in an accident with a commercial vehicle can vary depending on the type of truck and the severity of the collision. However, some of the most recurrent injuries are:

It is pertinent to seek medical care for any injuries sustained from a trucking accident due to the reckless actions of a negligent party. Insurance carriers will always try to lessen the liability of their client. At Farahi Law Firm, our Torrance personal injury attorney will fight to get you maximum compensation for both economic and non-economic damages on your insurance claim.

Some key findings by PolicyAdvice will help us understand better how trucks behave and how accidents happen:

Who is Liable in a Truck Accident?

As with any other motor vehicle accident, determining who is at fault is not an easy task if one wants to file a personal injury claim without representation. An expert truck accident attorney will help you with the proper investigation to get you the restitution you deserve and; will not fall prey to intimidation practices used by insurance adjusters and the at-fault party. According to California law, the parties that can be held liable are:

If the driver’s carelessness for whatever reason caused the crash, you can pursue legal action against the negligent driver. Common causes of driver irresponsibility include driving under the influence, fatigue, and speeding.

The trucking company can be held liable if there’s proof of negligent hiring of the drivers, faulty maintenance of the vehicle or if they broke federal laws and regulations.

Whenever there are malfunctions like brake failure, faulty steering systems, or defective hitches, the truck manufacturer can be held responsible for causing the crash due to shoddy manufacturing and should pay for the victim’s damages.

Overloaded or improperly loaded cargo will greatly impair the capacity of a driver to retain control of the vehicle and increase the likelihood of a jackknife or rollover crash. The cargo company may be at fault in such situations.

When the trucking company does not own the truck but is leasing it and providing a trucker with the commercial motor vehicle, the owner may be considered a liable party.

What Can You Be Compensated For?

An insurance company will try every trick in the book to lessen compensation for your personal injury claim. Victims of truck accidents must hold the responsible party liable for the mental anguish, severe injuries, loss of quality of life, or permanent disability they have experienced due to the accident.

Need a Truck Injury Attorney in Torrance? Get in Touch with Farahi Law Firm

If you or someone you love are truck accident victims, do not hesitate to contact us. Our truck accident lawyers at Farahi Law Firm are the most experienced in Torrance, California. We are available 24/7 and will fight tooth and nail for the compensation you deserve.