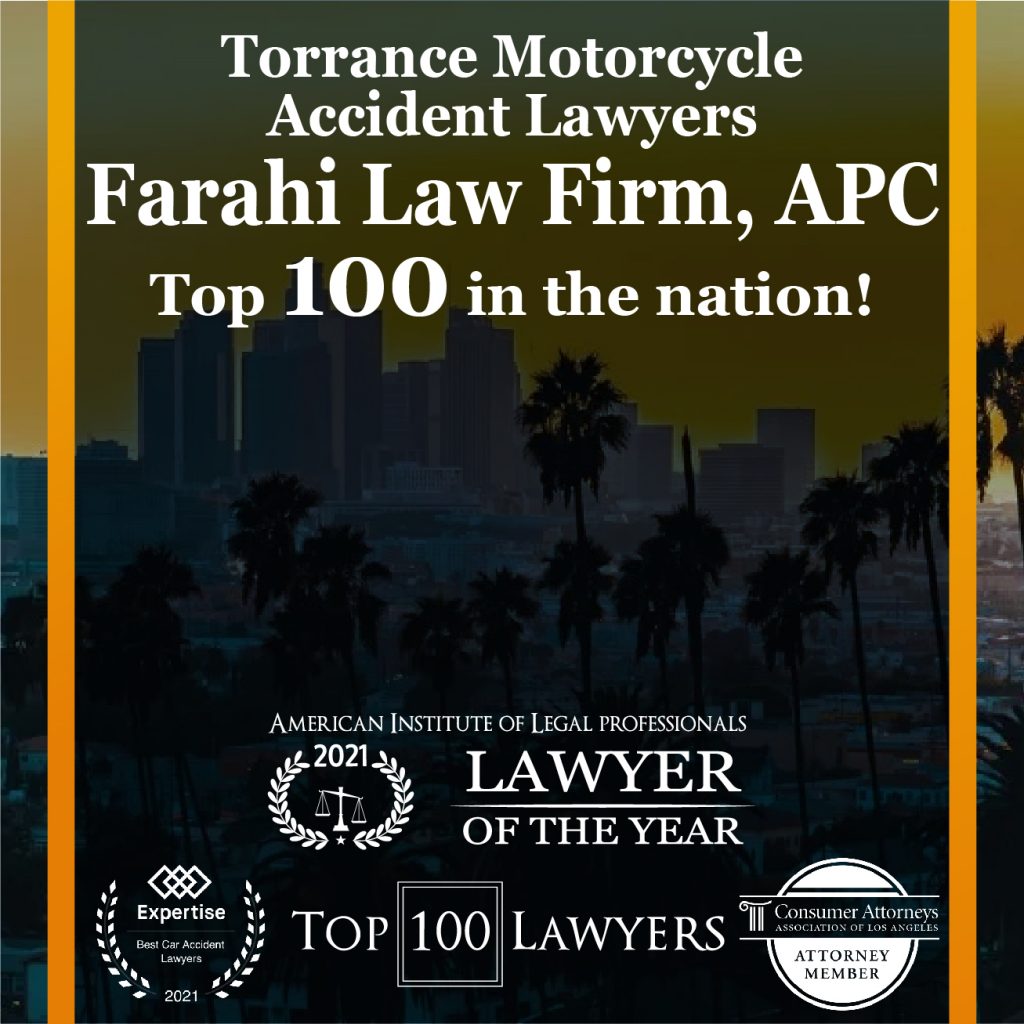 If you find yourself in a motorcycle accident due to the actions of a negligent driver or hazardous road conditions, our team of expert motorcycle accident lawyers in Torrance will defend you and help you get the medical treatment you need and the maximum compensation you deserve.

With motorcycles becoming more popular, thanks to their versatility, and car drivers taking little to no precautions to deal with these on the road, a motorcycle crash can not only lead to severe injuries but can also be fatal in many cases.

According to recent statistics provided by the NHTSA, motorcycle riders are overrepresented in traffic accident fatalities, with nearly 5,000 motorcyclists involved in fatal motorcycle accidents.

Contacting an experienced Torrance motorcycle accident attorney is vital to safeguard your personal injury claim from insurance adjusters. A personal injury lawyer will also ensure that you get fair financial compensation for all property damages and damages to your person.

Our motorcycle accident injury attorneys at Farahi Law Firm, APC are determined to help you reach that goal and get you the right monetary compensation you need and deserve.

Here, we outline the most common causes for motorcycle crashes in Torrance, California:

Riding a motorcycle at high speeds can be thrilling and liberating. But, going at high speeds puts you at risk of not noticing other vehicles on the road, leaving you with little time to react in case a car cuts in front of you or a big semi-truck appears behind a curve on the highway. With higher speeds, you are at greater risk of sustaining catastrophic injuries, which later leads to emergency medical care.

The State of California is one of the few states in the U.S. where it is legal to split lanes. While researchers argue that lane splitting improves traffic and road safety, most of the time, lane-splitting causes auto accidents in highly congested traffic areas and roadways. Thanks to this, more accidents are recorded every day because of sudden lane-splitting.

Alcohol and drug use

This is one of the leading causes of fatalities, not only in America but across the globe. About half of all motorcycle accident injury cases stem from driver negligence due to alcohol or drug use. There were 1,059 people killed in alcohol-impaired collisions in 2016, a 16.2% increase from 911 in 2015; and a 27.7% increase from 829 in 2012. If you are involved in an accident involving a drunk driver, our team of drunk driving accident attorneys can help you with a free consultation.

Many accidents occur because of the divided attention of the driver instead of just focusing on the road. And in the case of motorcycles, distracted drivers may fail to notice them because of their smaller size, leading to serious accidents. In fact, 80% of all vehicle crashes involve some form of driver inattention. This increases the risk of a crash which, in most cases, puts a lot more danger on the motorcyclist’s part.

Weaving in and out of traffic

One of the main appeals for motorcycles is their versatility at being able to avoid traffic congestions thanks to their small size. Nevertheless, zigzagging around vehicles to avoid traffic is extremely unsafe. Distracted drivers, faulty road conditions, and drivers suddenly trying to change lanes are among the common reasons why weaving in and out through traffic puts you at serious risk of being involved in an accident.

Lack of signages, potholes, slippery streets, poor illumination can catch you off guard, leading you to make decisions that can endanger your life, increasing the probability of an accident.

We all like our vehicles to be in prime condition. Sometimes, we encounter manufacturer defects, or a recent repair could result in a botched repair or a faulty part — which puts you at risk. In the case of manufacturing defects, the manufacturer is to be held liable for any accident or death because of the defective part.

Inexperienced drivers are prone to make risky moves on the road, which may endanger other motorists’ safety. Proper lessons on driving safely and responsibility should be observed to reduce the risks of accidents.

Motorcycle crashes are a serious matter. They can lead to long-term physical injuries and mental anguish that will not only lower your quality of life but also make medical expenses pile up, adding to both your and your loved ones’ pain and suffering. Using certified safety equipment while riding your motorcycle can lower the probability of serious injury, but it doesn’t make it go away.

For example, wearing a helmet will lower the risk of head injury (the most common injury type in motorcycle accidents) by 68%. But there is still a 32% chance of getting a serious injury that could affect your movement, your capacity for speech, lower your enjoyment of life, and cause you to seek out medical treatment.

Here are some of the most frequent injuries from bike crashes:

What Compensation Can You Get in a Motorcycle Accident Injury Claim?

Depending on the steps you take during a motorcycle crash, as well as the severity of it, you are entitled to fair compensation for any troubles the accident might have created for you.

This is why you must file a motorcycle injury claim as the injured party. Right after a collision, contact an experienced Torrance motorcycle accident lawyer for legal representation to ensure you get fair compensation for economic and non-economic damages. Here is what you can expect to be compensated for from the at-fault party:

What Can You Do to be Safer While Riding?

Because of the overrepresentation of motorcyclists in vehicular incidents, motorcyclists should take extra precautions when riding. Motorcycle riding can be extremely fun and liberating. That’s why to avoid accidents you should keep in mind the following safety tips:

It is common for motorcyclists to be blamed in motor vehicle crashes by both the party at fault and insurance companies, who will try every trick in the book to reduce the fair compensation you are entitled to.

Getting an experienced Torrance motorcycle accident lawyer is the best course of action you could take to protect your legal rights and prevent the other party from shifting the blame to you.

Contact us if you need help with a motorcycle injury claim. Our Torrance motorcycle accident lawyers will do everything in our power to help and ensure that you get a fair settlement for all your troubles.