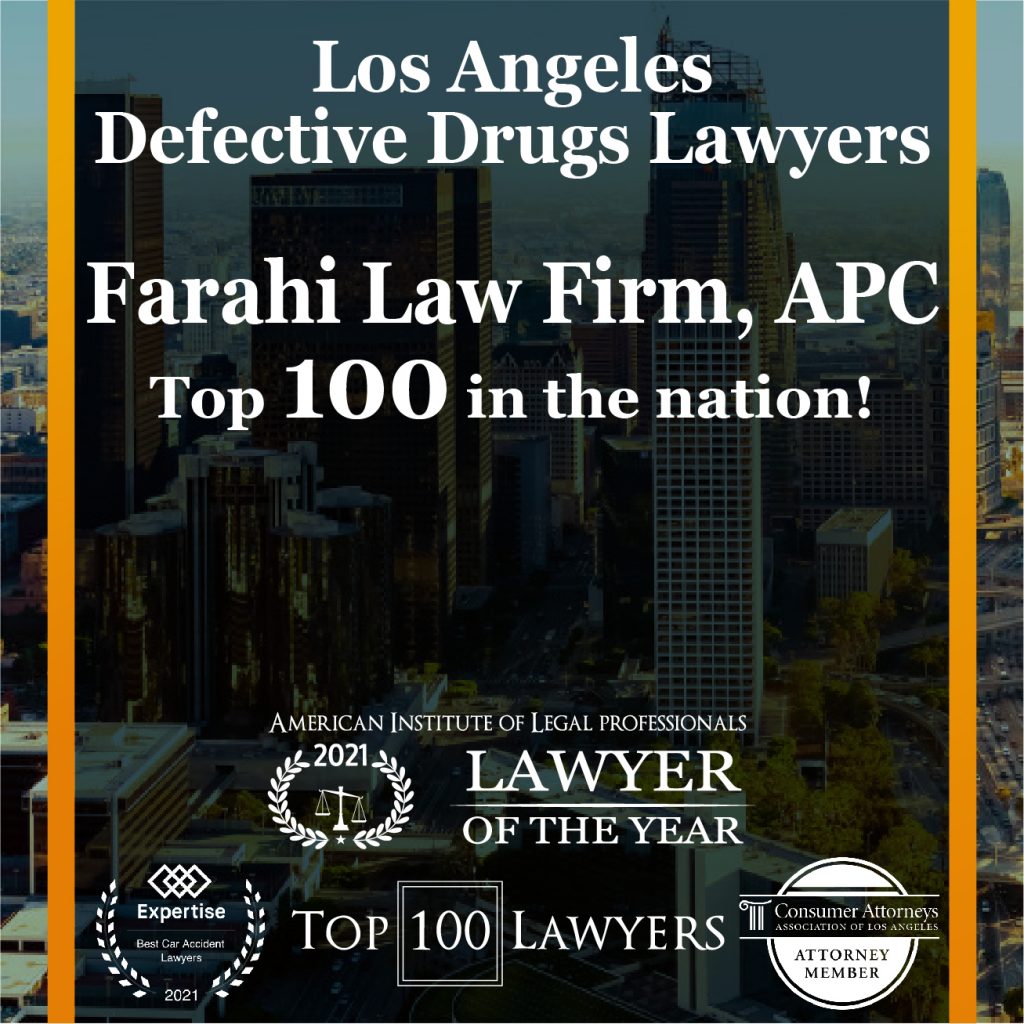 It’s a disturbing fact that defective drugs change thousands of lives every year. Instead of providing relief to a patient’s condition, these defective medications may aggravate their illness and lead to new serious medical conditions or death.

The pharmaceutical sector is constantly expanding, and so is the number of pharmaceutical negligence cases, with new drugs being launched every day. This often means constant discovery and recalling of new defective drugs.

Have you or a loved one sustained an injury due to the side effects of a defective drug? Farahi Law Firm’s experienced Los Angeles defective drugs lawyers have a zeal for justice and a willingness to vigorously advocate on behalf of accident victims to get the rightful compensation.

We understand that the process of filing a defective drug claim can be challenging and stressful. We are here to support you every step of the way. Contact us for a free consultation today.

The public has no way of knowing whether a medication is harmful, as they aren’t privy to the drug manufacturing process. Thus, the pharmaceutical company must maintain high standards in the drug-making process and deliver a safe product to the market. If they sell unsafe medications, cheat, hide evidence, or inadequately warn about adverse side effects, or otherwise deceive customers about their products, the pharmaceutical company must be held responsible for the damages they inflict.

In California, pharmaceutical liability falls under the field of law known as product liability. In a case involving pharma liability there are three causes of action:

When a drug manufacturing process was flawed and resulted in a defective product that caused an adverse reaction or injury, the pharmaceutical manufacturer may be held liable for the negligence. Manufacturing mistakes may occur during the labeling, packaging, or shipping of drugs.

Drugs with serious side effects

A product manufacturer must ensure the drugs and medicine go through adequate testing before they are sold to the public. If a consumer experiences severe side effects and was not made aware of the potential risks, they can sue the manufacturer or the marketing company.

Often known as “marketing defects,” this happens when a drug is correctly manufactured, but the packaging does not include the appropriate instructions, warnings, or recommendations concerning the use of that particular drug. This failure to disclose proper information makes such drugs unreasonably unsafe for consumers.

Pharmaceutical negligence reports usually get substantial media coverage as awareness of a drug defect is obviously in the public interest. And because of the complexities of defective drug law, having qualified Los Angeles defective drug lawyers to guide you through your personal injury claim is in your best interest. Their previous knowledge and awareness of Los Angeles’ drug recall rules will provide a far greater likelihood of success with a drug defect injury lawsuit.

In order to substantiate a defective pharmaceutical drug injury claim, complainants must prove that: they were injured, the drug was defective or falsely marketed, the injury was caused by the defective drug or its improper marketing.

Anyone in the pharmaceutical drug distribution chain can be a possible defendant in a pharmaceutical liability claim. Thus, multiple parties can be held accountable for such claims, including:

To hold a large-scale pharmaceutical drug manufacturer liable for manufacturing or marketing a defective drug is a complex and difficult task. These big drug companies will have their own product liability attorneys to represent them, and the budget they will have to defend themselves in each case will be high.

So what will Farahi Law Firm’s experienced defective drugs lawyers in Los Angeles do to improve the prospects of your defective drug claim? Our skilled drug defect attorneys will conduct a thorough investigation to determine the pharmaceutical company’s negligence that enabled these drugs to be released to the public domain. We would also investigate the drug manufacturer’s role in greater detail and find any negligence on their part. We will not hesitate in taking tort action against them.

Individuals who are hurt by a defective drug have the right to bring a case against the pharmaceutical company for the injury incurred. Since so many people can consume these defective drugs, the number of individual plaintiffs can be in the hundreds or thousands. The court allows all the plaintiffs to come together and file a class-action lawsuit against the manufacturer at once.

You and your Los Angeles defective drugs lawyer may also consider contacting the drug manufacturer first because they might be willing to settle out of court to minimize the media attention your case could receive. But, it is always beneficial for an injured individual to join in a mass tort. Class action lawsuits are likely to result in quicker and more substantial compensation as compared to an individual lawsuit.

Over recent years, there have been an abundance of defective drug cases. Several other medications have been taken out of the market following the discovery of adverse effects not previously known.

If you or a loved one took either of the following medications and thereby went through pain suffering leading to an injury or even a wrongful death, contact our expert pharmaceutical negligence attorneys immediately. You might have a claim.

The above list does not cover all the defective drugs that have been in circulation – and there are many more pharmaceutical products that could result in serious medical problems for patients, possibly entitling them to compensation. Farahi Law Firm, a top-rated personal injury law firm in Los Angeles, remains well informed of drug defect announcements.

Have You Sustained an Injury Due to a Defective Drug? Contact Us Today!

Have you or a loved one been injured as a result of taking a defective or dangerous drug in LA? Our defective drug attorneys have an established track record of winning personal injury cases for our clients. We work on a contingency fee basis. This means we won’t be collecting a single cent unless we win your case! Contact our Los Angeles defective drugs lawyers today to discuss your case at (310) 601-4925.

Here are some of the most frequently asked questions about defective drug claims in Los Angeles.

My Drug Bottle Had Incorrect Dosage Instructions. Who is Responsible?

To establish liability in such a case, the first thing we need is to identify when and where the error occurred. If the physician made a mistake by prescribing wrong dosage, he can be held liable for the damages. And if the pharmacy failed in reading the prescription correctly and advised wrong drug dose and frequency on the label, they can be sued for the resulting injuries. Hiring prescription drug lawyers as soon as possible will be in your best interests.

Could The Drug be Deemed Safe When Approved by the FDA?

Approval by FDA does not ensure a safe drug. It implies that the benefits greatly outweigh the risks of a medicine upon introduction to the public. New drugs are released into the market after thorough tests and clinical trials, and a number of drug’s side effects don’t surface until a large number of people use it.

At the same time we can’t deny the fact that the risks of taking the drugs were misrepresented or the benefits were overstated by the pharmaceutical companies. Pharmaceutical negligence attorneys can help you protect your legal rights if injured by a defective drug. Contact us today for a free consultation.

My Drug Was Not Prescribed by The Doctor, Can I Still File a Claim for Injuries?

Yes, you may have a chance to take legal action for your injuries from a defective drug. You can file a claim against the drug manufacturer if their negligence is proved. However as you didn’t get any prescription from the doctors, you’ll not be able to claim against the doctor or a pharmacy.

What Damages Can I Claim If Injured by a Defective Drug?

How Much Can I Win in a Defective Drug Claim?

If you wish to file a claim for your injuries after taking defective drugs, you are probably thinking how much you can win in your lawsuit against the drug manufacturer or any other liable party. But, it is difficult to predict how much compensation you can receive before the settlement of your defective drug lawsuit. It’s for the judge or jury to decide how much you should receive from a pharmaceutical liability claim.

However, you can speak with Farahi Law Firm’s Los Angeles defective drugs lawyers to help you understand the types of compensation that you are eligible to pursue if you were injured after taking defective drugs.