If you or someone you know has been involved in a Truck Accident, you already know how devastating and scary it can be for the ones involved. Sadly, not many people know the data behind truck accidents on the road. Our expert team of truck accident attorneys in California has compiled the following statistics to help you understand more about truck accidents as well as their consequences.

What we call a truck accident is a term used to englobe all motor accidents that involve one or more large, heavy-duty vehicles. Normally, the incident will be considered a truck accident when one of the vehicles involved weighs more than 10,000 pounds. An accident involving such large vehicles can be fatal in most cases, not only for other drivers but for the truckers themselves.

According to the Bureau of Labor Statistics (BLS), truck driving is considered the sixth most dangerous profession in the United States as of 2019, and the profession that had the most fatalities in 2018. Because Truck drivers spend most of their time on the road, the risk of an accident increases exponentially the more they drive. 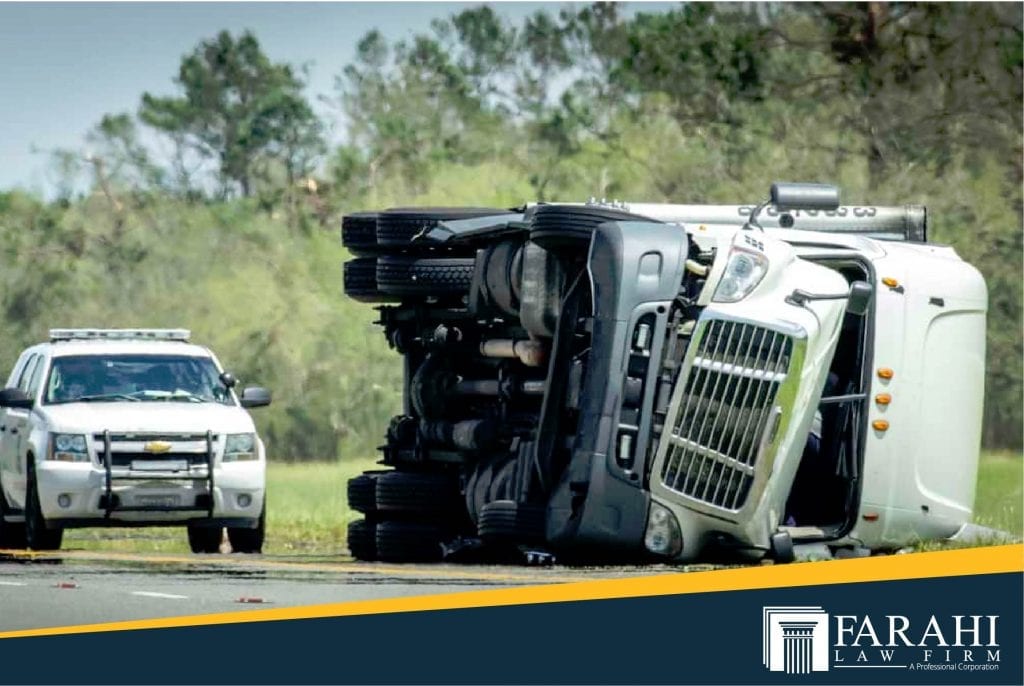 Thanks to the statistical analysis provided by the FMCSA we can infer that the trend for fatalities as a result of truck accidents is on the rise. They have increased by about 40% between 2009 and 2017, and another 8% from 2017 to 2018. This means that in about 10 years, truck accident fatalities have been steadily rising, with a total of 150% more truck accidents in 2018 than in 2009.

This should not be so surprising, even with all the safety measures trucking companies and drivers take. There are more vehicles on the road now than ten years ago, which is why the World Health Organization’s research shows that by 2030 road accidents will be the fifth leading cause of death in the United States, and today, vehicular accidents are the eighth cause of death globally.

Nevertheless, the high rate of involvement for large trucks, buses, 18-wheelers, and other heavy-duty vehicles is alarming. According to the statistics, 1.56 trucks are involved in a fatal accident per 100 million miles traveled. Looking at the raw numbers, in 2018 out of 500 thousand truck accidents reported by the police, 4,415 of them were fatal and little more than 100 thousand resulted in serious injury.

It is also important to note that 42% of all truck accidents involved more than two vehicles, with the largest percent of fatalities being occupants of normal passenger cars at about 33% and light truck (vehicles that weigh less than 8,500 pounds like pickup trucks or station wagons) occupants making up 30.8%.

This means that over 60% of all fatalities resulting from truck accidents, common passenger-vehicle occupants are the most at risk when crashing against a truck. 89.1% of all truck accidents result in fatalities yet only 18% of truck drivers die from them.

In a surprising reveal, doubles, and triples (trucks pulling two and 3 trailers respectively) account only for a little more than 3% of all road accidents while one may think that because of their larger size and mass they would make up for more truck accidents.

While we can outline several causes for truck accidents in the state of California and around the U.S., according to the Truck Accident Attorney Network they boil down to three main ones:

Of these causes, the most reported cause in fatal crashes is vehicular failure by truck drivers themselves, with tire failure or other vehicular cause as the prime reason. Yet, the data confirms that the leading cause for fatal truck accidents is not critical vehicular failure, which accounts for a little more than 2% of accident causes, but driver error. Data by the FMCSA shows us that at least one driver-related error was found in 32% of the numbers analyzed.

Speeding is one of the leading causes for truck accidents, just as it is with other motor vehicle accidents, followed by impairment (alcohol and drug use), and distracted driving was the first driving cause according to the study. Regarding impairment due to substance abuse, 350 out of 4,768 truck drivers tested were positive for at least one substance. Now, even if only 6% of the total sample population was tested, the trend shows that substance abuse is a major problem in truck drivers.

In a study conducted by the University of Central Arkansas (UCA), it was concluded that about 310,250 truck drivers would fail a urine and hair test for drugs 99% of the time. In this pre-employment test sponsored by the Trucking Alliance, out of 822 urine specimens collected a whopping 21% of samples failed drug testing.

Hair testing was also used, since drug traces can be found of hair follicles for more than 90 days, with some drugs staying even longer like in the study conducted on the hair of the late poet John Keats, where there were cocaine traces even 167 years after his death.

In the case of hair follicle tests, the UCA study could only collect about 8% of the projected samples, which all failed. Pointing at substance abuse being one of the most prevalent problems in the trucking industry. Substance abuse is one of the leading factors in all vehicular accidents including truck accidents, with drunk driving being the leading cause of fatal crashes in the U.S.

There are several causes for severe truck accidents, as well as statistics that project the causes, risks, and overall overview of the perilous place truck drivers are when hitting the road, not just for themselves but for others as well.

At Farahi Law Firm, APC will help you get your fair and just compensation when involved in a truck accident. Under California law, you are entitled to restitution for any and all damages be they physical, emotional, or material that a negligent truck driver might have caused you.

If you or a loved one have been in a truck accident do not hesitate to contact us at (844) 824-2955, we are available 24/7. We work on a No Win – No Fee basis, so you don’t have to pay us a cent until we win your case and obtain the highest amount of compensation.