The Los Angeles Police Department (LAPD) faces the largest lawsuit in history for injuries, violation of constitutional guarantees, and excessive use of force known in recent years.

The Chapter of Los Angeles of the National Guild of Lawyers, Black Lives Matter and Los Angeles Community Action Network filed a suit against LAPD that detailed 3,000 cases of police abuse.

All of these events happened during the protests that occurred in the last days of May and at the beginning of June, after the death of George Floyd in Minneapolis; as well as other Black men and women due to police actions. The death of George Floyd under the cruel hands of police sparks issues not only in America but in the whole world.

A call to end racism and police brutality has echoed loudly now more than ever.

The Severity of the Injuries Caused by Police Officers

According to press reports, the majority of the protesters suffered severe head and torso injuries because of the attempt of the LAPD to disperse the crowd by striking them with batons and shooting them with rubber projectiles.

The shocking part of all of this is that the LAPD Protocol actually allows officers to use batons to push large crowds and disperse them. Moreover, they are only allowed to strike someone if he/she presents a danger. Presenting a “danger” in this context is solely subjective which gives police officers the right to decide on whether someone poses a threat or danger from their own point of view.

Clearly, police officers made decisions clouded with an unjust judgment towards the people on the streets who are just fighting for equal rights. 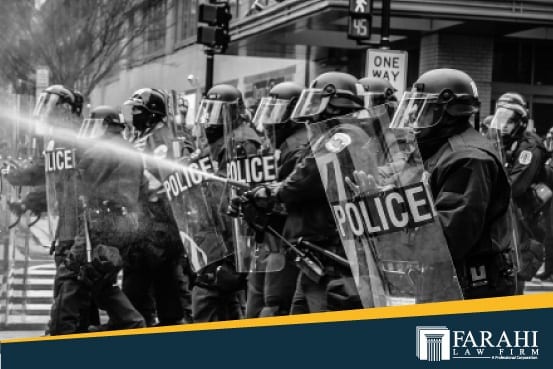 Civil rights lawyer, Carol Sobel, who also represents some of the protesters, told the media that the injuries suffered by the protesters were not only severe but deadly. Furthermore, a protest does not equate to being arrested but only a court order. These people don’t deserve to be arrested and harassed like that.

In the stories narrated by the press, the case of Abigail Rodas, a woman who went to the protest in Fairfax on May 30, caught the most attention. However, when she and a friend tried to leave the scene, officers began to shoot them with sponge projectiles.

Rodas got shot on the face, lost consciousness, and was driven to Cedars-Sinai Medical Center. She was diagnosed with a severe fracture to her right mandible and was immediately rushed into surgery.

It has been a very painful process for Rodas. Rodas could not talk for 10 days and be on a soft-food diet for a week. The most excruciating part of the process was three weeks later, she still had screws in her gums and rubber bands to immobilize her jaw while the bones rejoined.

Another case that attracted the media’s attention was that of Laura Montilla who filed a sexual assault claim against Los Angeles Sheriff, Alex Villanueva, and other unidentified officers.

In her claim, Montilla stated that different LAPD officers groped her breasts and vagina during her arrest; not identifying the policemen. Moreover, she declared that the zip ties they used to handcuff her were so tight that she eventually lost sensibility in her right hand and caused lacerations and bruises in her wrist for days.

Consequently, she was arrested alongside homeless people who would have been exempted from the curfew but were also subjected to “torturous, inhumane acts” by the LAPD.

Montilla stated that she was loaded on a bus with people in panic and screaming in the dark. Furthermore, the police never explained where they were being taken and why they were subjecting them to blaring heavy metal music.

Harassed victims, including Montilla, have also accused the LAPD of exposing them to SARS-CoV2 not only because of overcrowding the detainees on buses but also because officers were not required to use masks during operations.

Likewise, medical experts have made the same observations as LAPD poses a risky behavior for moving criminals on crowded buses during the sanitary emergency for coronavirus.

LAPD problems do not end with the claims for police abuse. It could face a lawsuit without precedent for exposing the protesters to a possible COVID-19 contagion when they were enclosed on buses after being arrested.

Nowadays, the workers’ compensation is the only available benefit in the case of coronavirus infection. To obtain it, you would have to get infected while working. Therefore, in this context, the policemen are the only ones who could avail of the compensation if they contracted the virus.

The Other Side of the Story

When asked about the claims, LAPD spokesperson, captain Gisselle Espinoza said that the Department was “fully committed to investigating every allegation of misconduct or excessive force related to the recent protests”  and had assigned 40 internal affairs investigators to the task.

Regarding this, LAPD Chief, Michel Moore stated that the officers were “subjected to countless beatings and witnessed acts of vandalism, fires, and looting.”

Moore claimed that he was obligated to give orders to disperse protesters and enforce curfews at various locations because things were out of control, endangering people’s lives.

However, he admitted that he was not happy with the idea that some officers use batons and he said that these officers were arrested on the field.

Meanwhile, a few weeks before, the LAPD informed that dozens of their officers got injured during the protests, one of them even ended up with a fractured skull.

Following these lawsuits will be worth it for the public to know the angle that the lawyers will give for every plaintiff’s case.

Most importantly, if you or anyone you know end up injured in any of these events, bring your case to the court as soon as possible. Remember that with the involvement of the police in this issue, you only have six months to do it.

At Farahi Law Firm, APC, we have experienced, personal injury lawyers who will bravely fight for your rights. Contact us for a free consultation or call us at (844)244-2955.